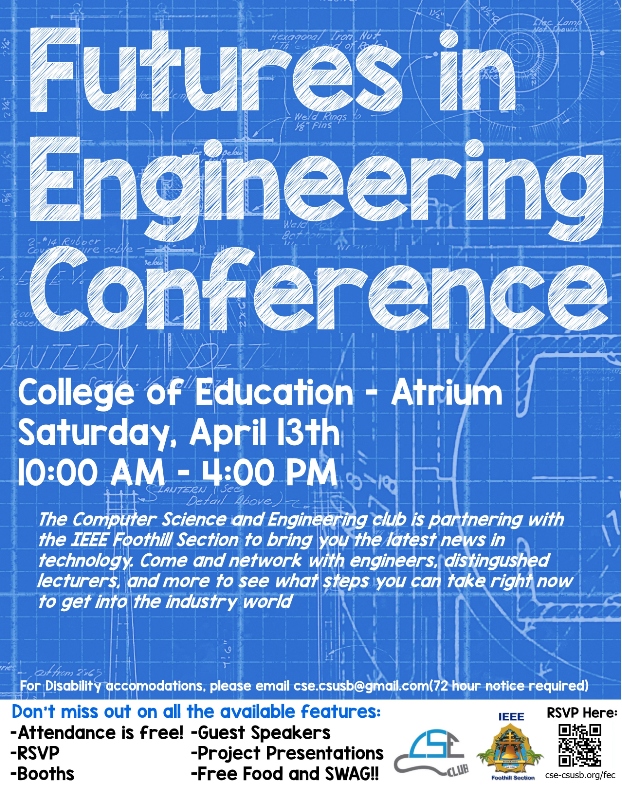 The Futures in Engineering Conference (FEC) at CSUSB is a one-day event hosted by the Computer Science & Engineering (CSE) Club, the IEEE Student Branch and ACM Student Chapter at CSUSB that brings alumni, graduate and undergraduate students from CSUSB and professionals in the computing and engineering industries together.

The FEC features keynotes from engineering professionals in the auditorium and booths hosted by businesses, students, and student organizations in the event lobby.

This is the opportunity for students with an interest in computing and engineering to build upon their career network, and learn from the experiences shared by industry professionals who are donating their time to expand the career opportunities available to the CSUSB community! 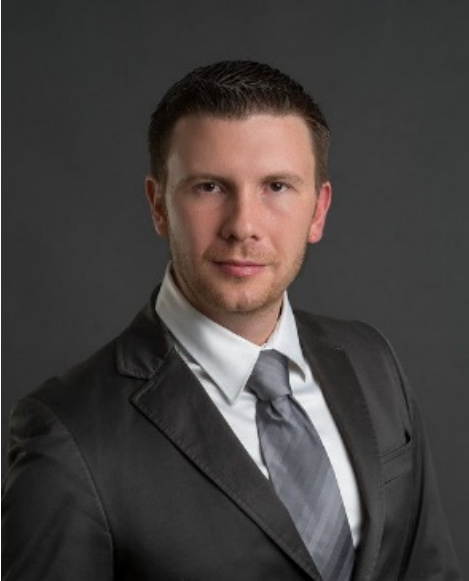 History and Future of Radar and EW

Aerospace Electronic Systems, and in particular Radar and Electronic Warfare (EW), are one of the most active yet unappreciated fields in the Electrical Engineering community. The IEEE AESS members account for only 1% of the IEEE total, yet the AES market is estimated to be in the range of hundreds of billions of dollars. Radar and EW applications are typically unheard by the general public, yet they are the backbone of any military force worldwide, providing defense, security, and peace. The history of radar and EW is also intriguing: Robert Buderi considered radar as “the invention that changed the world,” while General Patterson though that radars were the real reason why the Allied forces defeated the Axis powers. This talk will introduce you to the captivating history of radar/EW, leading to the most recent radar/EW systems worldwide and their applications, both civilian and military ones. The talk will show you what radars can do for the society and what the AES industry is looking for, in particular from young engineers. The talk will end with an overview of the IEEE AESS, its benefits to the members, and in particular to students and young professionals.

Dr. Lo Monte has wide-ranging experience in applied Radar, RF, DSP, EW system design and prototyping, from small companies, consulting, academia, research institutions, to large defense contractors and government agencies worldwide. He serves as Chief Scientist at Telephonics, a top-100 defense corporation specializing in ISR, with the role of translating research innovations into commercial products. Prior to that, he was a Professor at the University of Dayton, and the Executive Director of the Mumma Radar Laboratory. Dr. Lo Monte has published over 70 peer-reviewed journal and conference papers and two book chapters.

Dr. Lo Monte is very active in the IEEE community, serving in the AESS Board of Governors as the VP for Education. Dr. Lo Monte is also the Topical Editor of the IEEE Sensors Journal for “Radiation Sensors.” Dr. Lo Monte is also an AESS Distinguished Lecturer and an approved AESS Short Course Instructor. He taught many short courses in radar, EW and RF worldwide, with a focus to underserved areas. He is also the Young Professionals coordinator for Region 1. 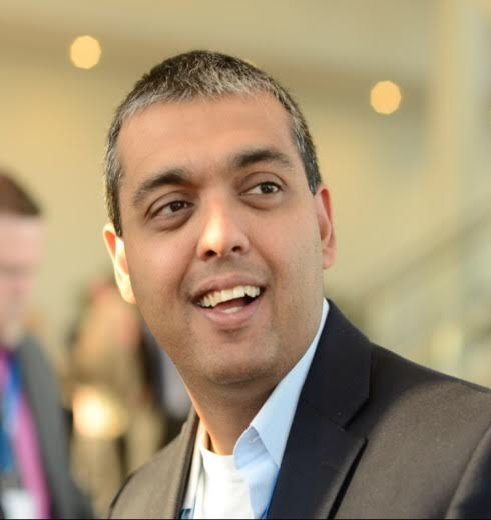 The CubeSat Radio Frequency Interference Technology (CubeRRT) Validation mission is the first ever technology mission launched to demonstrate the ability to filter radio frequency interference (RFI) in real-time over wide-bandwidths. CubeRRT mission has enabled the path for future science returns with wider bandwidth in an ever shrinking observation spectrum. The mission was launched in June 13, 2018 and has since successfully demonstrated and validated the technology readiness level of digital backend algorithms and technology.

Earth observation remote sensing systems have an extremely limited spectrum allocations. Most of these allocations are shared with several commercial and communication applications, with nearly 90% of the bandwidth between 6 to 40 GHz for non-Earth exploration use. Over the past couple of decades the need for commercial spectrum has been increasing steadily. The ever increasing spectrum has been introducing radio frequency interference (RFI) in passive microwave observations. This has resulted in increased noise and bias in geophysical science retrievals. Though once completely corrupted, microwave measurements cannot be recovered, it is possible to filter out RFI signals and salvage any remaining clean signals using advanced statistical techniques. The SMAP mission successfully demonstrated this on a space-borne mission with ground processing. The algorithm is harder to implement at higher measurement bandwidths than SMAP and would result in extremely high data downlink rates. The CubeSat Radio Frequency Interference Technology (CubeRRT) validation mission was recently launched to demonstrate the ability to filter out RFI signals and retrieve clean science signals from passive microwave radiometry on-board the space craft. The CubeRRT mission was designed to ingest 1 GHz of radiometric measurement bandwidths at microwave frequencies from 6 to 40 GHz. CubeRRT in its first 30 minutes, sucessfully demonstrated on-board RFI filtering using complex on-board algorithms and enabling lowered downlink data rates. CubeRRT has also increased the technology readiness level of the digital backend algorithms and FPGA technology by collecting several hundreds of hours of data without a reset. The CubeRRT mission was led by the Ohio State University with JPL, NASA Goddard, and Blue Canyon Technologies as partners.

He is currently a technologist at the NASA Jet Propulsion Laboratory in Pasadena, CA.  He joined JPL in 2011 as a member of the Microwave Systems Technology group.  He was a Research Engineer with the Space Physics Research Laboratory, University of Michigan and a Research Assistant with the Danish National Space Center, Technical University of Denmark (DTU), Lyngby.  He was also with the Space Applications Center, Indian Space Research Organization, Ahmedabad.

His research interests include radio frequency interference algorithm development and mitigation, microwave radiometer system development and calibration. He was on the calibration team of the Aquarius radiometer, and was the instrument-scientist on the RACE mission. He is currently a science team member on the Soil Moisture Active Passive mission, and calibration team for the Jupiter observing Juno microwave radiometer. He is also the JPL lead for the CubeRRT mission, and instrument manager for the PALS airborne system.