The energy needs for wireless systems is limiting the evolution of most of the IoT and 5G
future solutions. In this talk an overview of the energy problem in wireless communication
systems will be presented, either from a mobile network point of view, but also from a IoT
point of view. The main objective is to discuss future wireless paradigms that will be
changing soon with 5G and beyond, those include the spread of a distributed mobile network
by using Cloud Radio Access Networks, with its associated Software Defined Radio
approaches, but also the issue of battery-less wireless devices, combining wireless power
transmission and backscatter communications. The talk starts first with a general overview of
the energy needs for a future XG networks, and then presents in an integrated way both
approaches of C-RAN and IoT wireless design. The presentation will cover topics like the
hardware part of the SDR and design of battery-less wireless sensors networks. Issues like
characterization of mixed-signal devices, designing of C-RAN SDR approaches, design of
passive backscatter sensors will be discussed, according to the audience. 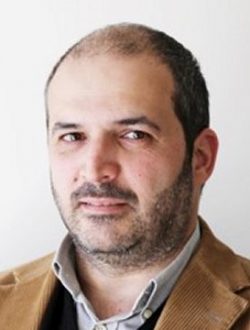 Pr. Nuno Borges Carvalho of The Institute of Telecommunications, University of Aveiro

Nuno Borges Carvalho (S’97–M’00–SM’05-F’15) was born in Luanda,
Angola, in 1972. He received the Diploma and Doctoral degrees in
electronics and telecommunications engineering from the University of
Aveiro, Aveiro, Portugal, in 1995 and 2000, respectively.
He is currently a Full Professor and a Senior Research Scientist with the
Institute of Telecommunications, University of Aveiro and an IEEE Fellow.
He coauthored Intermodulation in Microwave and Wireless Circuits (Artech
House, 2003), Microwave and Wireless Measurement Techniques
(Cambridge University Press, 2013) and White Space Communication
Technologies (Cambridge University Press, 2014). He has been a reviewer
and author of over 200 papers in magazines and conferences. He is associate editor of the IEEE
Microwave Magazine and Cambridge Wireless Power Transfer Journal and former associate editor of
the IEEE Transactions on Microwave Theory and Techniques.
He is the co-inventor of six patents. His main research interests include software-defined radio frontends,
wireless power transmission, nonlinear distortion analysis in microwave/wireless circuits and
systems, and measurement of nonlinear phenomena. He has recently been involved in the design of
dedicated radios and systems for newly emerging wireless technologies.
Dr. Borges Carvalho is the chair of the IEEE MTT-20 Technical Committee and the past-chair of the
IEEE Portuguese Section and MTT-11 and also belong to the technical committees, MTT-24 and
MTT-26. He is also the vice-chair of the URSI Commission A (Metrology Group). He was the
recipient of the 1995University of Aveiro and the Portuguese Engineering Association Prize for the
best 1995 student at the University of Aveiro, the 1998 Student Paper Competition (Third Place) of the
IEEE Microwave Theory and Techniques Society (IEEE MTT-S) International Microwave
Symposium (IMS), and the 2000 IEE Measurement Prize.