The wireless community has been occupied by the 5G related developments for the last many years. As 5G moves from the standardization phase to the deployment phase, a new brainstorming endeavour has started for the subsequent generation (6G) wireless networks. The roots of today’s (4G & 5G) wireless access architecture (the terrestrial cellular network) go back to 1940s. The access architecture has evolved substantially over the decades. However, rapid developments in a number of domains outside telecommunications, including those in aerospace and satellite industries as well as in artificial intelligence, will likely result in a disruptive transformation in the wireless access architecture in the next 20+ years. In this talk, an ultra-agile, dynamic, distributed, and partly-autonomous vertical heterogeneous network (VHetNet) architecture with very low earth orbit satellites (VLEOs), high-altitude platform stations (HAPS), and drone BSs for almost-ubiquitous super- connectivity will be presented. In the absence of a clear technology road map, the talk has, to a certain extent, an exploratory view point to stimulate further thinking and creativity on opportunities and challenges in wireless research and innovation. 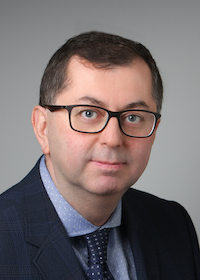 Halim Yanikomeroglu is a Professor in the Department of Systems and Computer Engineering at Carleton University, Ottawa, Canada. His group has made contributions to 4G and 5G wireless networks. He has had extensive collaboration with industry which resulted in 35 granted patents. During 2012-2016, he led one of the largest academic-industrial collaborative research projects on pre-standards 5G wireless, sponsored by the Ontario Government and the industry. In Summer 2019, he started a new project on the 6G access architecture. Dr. Yanikomeroglu supervised 22 PhD students (all completed with theses). He is a Fellow of IEEE, a Fellow of Engineering Institute of Canada (EIC), a Fellow of Canadian
Academy of Engineering (CAE), and a Distinguished Speaker for both IEEE Communications Society and IEEE Vehicular Technology Society. He has been one of the most frequent tutorial presenters in the leading international IEEE conferences (33 times). He served as the General Chair and Technical Program Chair of several major international IEEE conferences; he also served in the Editorial Boards of several IEEE periodicals. He is currently serving as the Chair of the Steering Committee of IEEE’s flagship Wireless Communications and Networking Conference (WCNC).