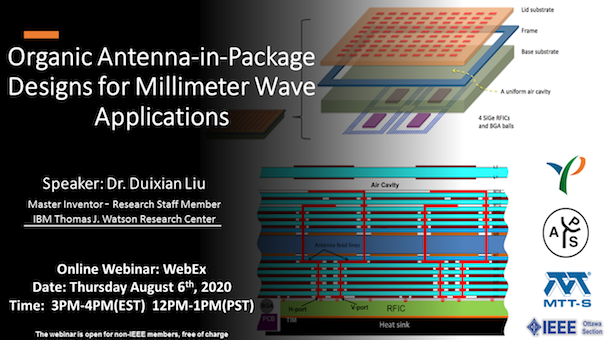 There is an increasing demand for low-cost millimeter-wave (mmWave) systems that operate in the 60, 94 GHz, and recently 28 GHz bands for Gbps data rate communication and imaging applications. Typical applications in the 60 GHz band demanding Gbps data rates include wireless gigabit Ethernet and wireless uncompressed high-definition video. Large available spectrums, short wavelengths, and the ability to operate in dusty and foggy conditions have made mmWave frequencies at 94 GHz attractive for high-resolution imaging applications.

Significant momentum has started to build around the 5G wireless communication technologies. It is expected that 5G mobile communication systems will become commercially available sometime around 2020. The objectives for developing 5G cellular networks include higher capacity, higher data rate, lower end-to-end latency, massive device connectivity, reduced cost and consistent Quality of Experience provisioning. For 5G radio access infrastructure such as base stations, one of the key enabling technologies is mmWave beam-forming. 28 GHz band is one of the candidate bands for 5G applications. Many of these mmWave systems require phased arrays. Recent advances in silicon technologies have enabled single chip solutions, making these technologies more commercially attractive. However, for the mmWave market to flourish, not only are low-cost devices solutions required, but also low-cost antenna and packaging solutions. The short wavelength at mmWave frequencies allows antennas to be embedded within a package or integrated on a chip.

Antenna-in-package solutions have been recognized to have advantages over antenna-on-chip solutions in bandwidth, radiation efficiency, and low cost due to RFIC die area usage and design flexibility. The realization of robust, efficient and broadband mmWave antennas within a multilayer organic (MLO) package is challenging due to assembly difficulties, material selection, and manufacturing tolerances. This presentation will discuss these challenges and some solutions based on our group’s past 16 years mmWave research works.

Please use the link in the registration section to sign up for the event.

To join event use the following link.

From 1990 to 1996, he was with Valor Enterprises Inc. Piqua, Ohio, initially as an Electrical Engineer and then as the Chief Engineer, during which time he designed an antenna product line ranging from 3 MHz to 2.4 GHz for the company, a very important factor for the prestigious Presidential “E” Award for Excellence in Exporting in 1994. Since April 1996, he has been with the IBM T. J. Watson Research Center, Yorktown Heights, NY, as a Research Staff Member. He has received five IBM’s Outstanding Technical Achievement Awards and one Corporate Award (IBM's official acknowledgement of breakthrough technical achievements that have led to significant market and industry success for the company). He was named Master Inventor in 2007. He was the chief editor for Advanced Millimeter-wave Technologies - Antennas, Packaging and Circuits published by Wiley in 2009, co-editor for Handbook of Antenna Technologies published by Springer in 2016, and editor for Antenna-in-Package Technology and Applications published by Wiley in March 2020. He has authored or coauthored more than 130 journal and conference papers. He received the Best Paper Prize of the 2007 IEEE International Workshop on Antenna Technology for “Antenna-in-package in LTCC for 60 GHz Radio,”  the 2012 S. A. Schelkunoff Prize Paper Award of the IEEE Antennas and Propagation Society for “Dual Grid Array Antennas in a Thin-Profile Package for Flip-Chip Interconnection to Highly Integrated 60-GHz Radios,”  the 2017 IEEE Journal of Solid-State Circuits Best Paper Award for “A 28-GHz 32-Element TRX Phased-Array IC With Concurrent Dual-Polarized Operation and Orthogonal Phase and Gain Control for 5G Communications,” and the IEEE Antennas and Propagation Society 2020 John Kraus Antenna Award for “pioneering and significant contributions to the development of antenna-in-package (AiP) technology.” He has 132 patents issued. His research interests are antenna design, EM modeling, chip packaging, digital signal processing, and communications technologies.