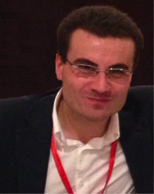 are pleased to bring a Virtual Distinguished Lecture event on

How it Works, State of Research, and the Road Ahead”

Laboratory of Signals and Systems

Reconﬁgurable intelligent surfaces (RISs) are an emerging transmission technology for application to wireless communications. RISs can be realized in different ways, which include (i) large arrays of inexpensive antennas that are usually spaced half of the wavelength apart; and (ii) metamaterial-based planar or conformal large surfaces whose scattering elements have sizes and inter-distances much smaller than the wavelength. Compared with other transmission technologies, e.g., phased arrays, multi-antenna transmitters, and relays, RISs require the largest number of scattering elements, but each of them needs to be backed by the fewest and least costly components. Also, no power ampliﬁers are usually needed. For these reasons, RISs constitute a promising software-deﬁned architecture that can be realized at reduced cost, size, weight, and power (C-SWaP design), and are regarded as an enabling technology for realizing the emerging concept of smart radio environments (SREs). In this talk, the speaker will (i) introduce the emerging research ﬁeld of RIS-empowered SREs; (ii) overview the most suitable applications of RISs in wireless networks; (iii) present an electromagnetic-based communication-theoretic framework for analyzing and optimizing metamaterial-based RISs; (iv) provide a comprehensive overview of the current state of research; and (v) discuss the most important research issues to tackle. Owing to the interdisciplinary essence of RIS-empowered SREs, ﬁnally, the speaker will put forth the need of reconciling and reuniting C. E. Shannon’s mathematical theory of communication with G. Green’s and J. C. Maxwell’s mathematical theories of electromagnetism for appropriately modeling, analyzing, optimizing, and deploying future wireless networks empowered by RISs.

Marco Di Renzo was born in L’Aquila, Italy, in 1978. He received the Laurea (cum laude) and Ph.D. degrees in electrical engineering from the University of L’Aquila, Italy, in 2003 and 2007, respectively, and the Habilitation à Diriger des Recherches (Doctor of Science) degree from University Paris-Sud, France, in 2013. Since 2010, he has been with the French National Center for Scientiﬁc Research (CNRS), where he is a CNRS Research Director (CNRS Professor) in the Laboratory of Signals and Systems (L2S) of Paris-Saclay University – CNRS and CentraleSupelec, Paris, France. He is a Nokia Foundation Visiting Professor at Aalto University, Helsinki, Finland, and an Honorary Professor at University Technology Sydney, Sydney, Australia. In Paris-Saclay University, he is a Member of the coordinating committee of the Ph.D. school on Information and Communication Technologies, and the Coordinator of the “Intelligent Networks” research cluster within the DigiCosme Laboratory of Excellence. He serves as the Editor-in-Chief of IEEE Communications Letters. He served as an Editor of IEEE Transactions on Communications, IEEE Transactions on Wireless Communications, IEEE Communications Letters, and as the Associate Editor-in-Chief of IEEE Communications Letters. He is a Distinguished Lecturer of the IEEE Vehicular Technology Society and IEEE Communications Society. He is a recipient of several awards, including the 2013 IEEE-COMSOC Best Young Researcher Award for Europe, Middle East and Africa, the 2013 NoE-NEWCOM# Best Paper Award, the 2014-2015 Royal Academy of Engineering Distinguished Visiting Fellowship, the 2015 IEEE Jack Neubauer Memorial Best System Paper Award, the 2015 CNRS Award for Excellence in Research and Ph.D. Supervision, the 2016 MSCA Global Fellowship (declined), the 2017 SEE-IEEE Alain Glavieux Award, the 2018 IEEE-COMSOC Young Professional in Academia Award, the 2019 Nokia Foundation Visiting Professorship, and 8 Best Paper Awards at IEEE conferences (2012 and 2014 IEEE CAMAD, 2013 IEEE VTC-Fall, 2014 IEEE ATC, 2015 IEEE ComManTel, 2017 IEEE SigTelCom, EAI 2018 INISCOM, IEEE ICC 2019). He is a Highly Cited Researcher according to Clarivate Analytics and Web of Science, and a Fellow of the IEEE.

If you have any question, please connect with Fawzi Behmann at f.behmann@ieee.org, IEEE Chair of Joint Austin Chapters (ComSoc/SP/CESoc & Computer/EMBS)Or Dr. Zafar Taqvi at ztaqvi@gmail.com