The EPFL IEEE Student Branch and the IEEE Life Member Activity Group kindly invites you to participate to November Stammtisch. We are very pleased to have Prof. Auke Ijspeert, IEEE Fellow, as a speaker. The following is a brief abstract of the event.

The ability to efficiently move in complex environments is a fundamental property both for animals and for robots, and the problem of locomotion and movement control is an area in which neuroscience, biomechanics, and robotics can fruitfully interact. In this talk, I will present how biorobots and numerical models can be used to explore the interplay of the four main components underlying animal locomotion, namely central pattern generators (CPGs), reflexes, descending modulation, and the musculoskeletal system. Going from lamprey to human locomotion, I will present a series of models that tend to show that the respective roles of these components have changed during evolution with a dominant role of CPGs in lamprey and salamander locomotion, and a more important role for sensory feedback and descending modulation in human locomotion. I will also present a recent project showing how robotics can provide scientific tools for paleontology.

You don't need to be a member of IEEE to attend the event, it is open to all. 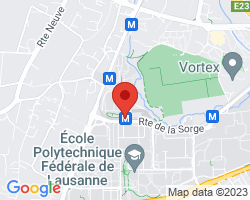 Auke Ijspeert is a professor at EPFL (the Swiss Federal Institute of Technology in Lausanne, Switzerland), IEEE Fellow, and head of the Biorobotics Laboratory. He has a B.Sc./M.Sc. in physics from the EPFL (1995), and a PhD in artificial intelligence from the University of Edinburgh (1999). His research interests are at the intersection between robotics and computational neuroscience. He is interested in using numerical simulations and robots to gain a better understanding of animal locomotion and movement control, and in using inspiration from biology to design novel types of robots and locomotion controllers (see for instance Ijspeert et al, Science, Vol. 315, 2007 and Ijspeert, Science Vol. 346, 2014).

He is also interested in assisting persons with limited mobility using exoskeletons and assistive furniture.

With his colleagues, he has received paper awards at ICRA2002, CLAWAR2005, IEEE Humanoids 2007, IEEE ROMAN 2014, CLAWAR 2015, and CLAWAR 2019. He is associate editor for the International Journal of Humanoid Robotics and the IEEE Transactions on Medical Robotics and Bionics. He is also a member of the Board of Reviewing Editors of Science magazine..